Kegs aren't just the domain of pubs and student parties. If you're prepared for a little investment in some extra equipment, you too can brew beer by the keg – which not only will give your homebrew setup some added ‘wow' factor, it'll save you time and effort and give you more control, and you'll be drinking beer from the tap rather than the bottle. 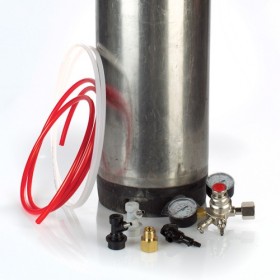 If you're inclined to a certain amount of laziness when it comes to cleaning, sanitising, and filling 30-plus bottles, or if you've got a limited amount of space for storing your homebrew experiments, kegging is for you. You will still need to pay attention to, and spend time cleaning and sanitising - no short cuts there.

The keg lets you store and mature your entire batch in one vessel, exponentially cutting down your prep time so you can get to the fun part. You can also carbonate your brew yourself, so you'll be drinking it sooner, and you can easily control the carbonation level - no more hoping that you primed the bottles with enough sugar to get the desired carbonation.

There are just a couple of downsides to kegging: the keg's not so easy to transport if you want to take samples of your brew to a party, and there is some extra equipment to buy. However, it's no big deal to fill a few bottles from your keg, and the extra equipment is worth it for the convenience.

CO2, or carbon dioxide, provides the pressure to dispense the beer and carbonates it. You'll also need a regulator for the CO2 – this connects to your CO2 cylinder and lets you control the pressure inside the keg, dialing it up to carbonate and down to dispense.

You have a few choices for your CO2 cylinder. You can either buy or rent one, and refill it when it's empty. As a starting option, however, you could go for the good old SodaStream cylinders; you'll just need an adapter.

You'll also need two hoses and connectors – gas line to get the CO2 into the keg, beer line to get the beer out. The ‘beer out' one will connect to a tap of your choice; you can go for the standard picnic tap, or a proper draught tap.

Cleaning up your keg

It's highly cost-effective to buy a used keg, but before you start your brewing it's vital to give it a proper clean. If you choose to buy a new keg, you'll still want to start by cleaning it out. And, obviously, you'll need to clean and sanitise it after every brew.

We've already put together a resource on cleaning and sanitising, and it all applies to your keg. PBW is a good cleaner to use as it's designed to dissolve the kind of residue that brewing leaves behind. Give your keg a good scrub and soak the removable parts of your keg in PBW.

When you're satisfied that the inside of the keg and all its components are squeaky clean, it's time to sanitise. Use a sanitiser like Star San – do not use bleach or anything chlorine-based as this will corrode the stainless steel.

When your brew has fermented, it's time to fill the keg. The key here is to make sure that you get the oxygen out of the keg – the brew will be in the keg for several weeks and you don't want it to oxidise. CO2 dissolves best in cold beer, so ideally make sure it's well-chilled.

Give the keg some CO2 to displace any oxygen. Release the pressure, open the lid, and siphon in your brew. Wet your top O-ring to help it seal and put the lid back on. Pressurise the keg with CO2 and open the relief valve to get the air out. Repeat two or three times to make sure it's properly purged of oxygen, and leave your brew to mature.

To carbonate your brew, connect the keg back up to your CO2 cylinder. It's easy to adjust the carbonation – for more fizz turn the pressure up, for less turn it down and release the pressure inside the keg.

Chances are, once you've kegged a couple of brews, you won't look back. And we all know what that means – getting more equipment.

Kegging lets you have several brews on the go at once, so your first stop might be a couple of extra kegs.

But where to put them? Next on the list could be a kegerator - a refrigerator especially designed for kegs. A kegerator allows you to draw the beer straight from the fridge. It's also possible to adapt an ordinary fridge or chest freezer into a kegerator.

As always, Brewshop has your back. If you're keen to try kegging and want to make it really easy for yourself, check out our kegging starter kit. This has everything you need to brew your first keg of beer – all you provide is the brew to put in it and the CO2 cylinder, and you're away.